Before you start writing any Ember code, it's a good idea to get an overview of how an Ember application works. 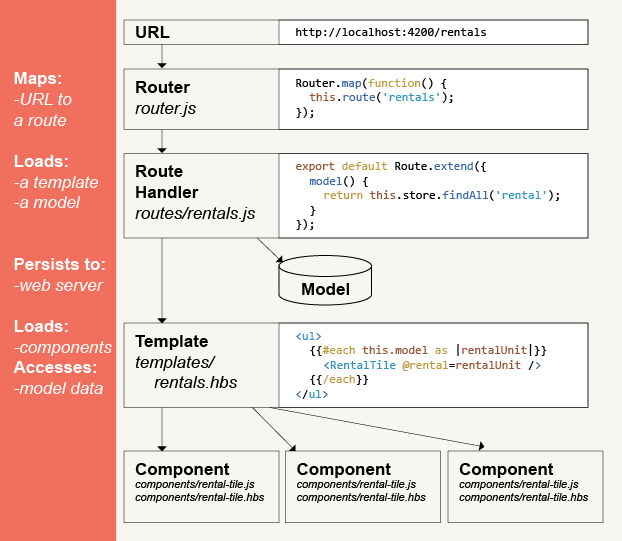 Imagine we are writing a web app for a site that lets users list their properties to rent. At any given time, we should be able to answer questions about the current state like What rental are they looking at? and Are they editing it? In Ember, the answer to these questions is determined by the URL. The URL can be set in a few ways:

No matter how the URL gets set, the first thing that happens is that the Ember router maps the URL to a route handler.

The route handler then typically does two things:

Ember uses templates to organize the layout of HTML in an application.

Most templates in an Ember codebase are instantly familiar, and look like any fragment of HTML. For example:

Ember templates use the syntax of Handlebars templates. Anything that is valid Handlebars syntax is valid Ember syntax.

Templates can also display properties provided to them from their context, which is either a component or a route's controller. For example:

Here, {{this.name}} is a property provided by the template's context.

For example, a property rentals application would want to save the details of a rental when a user publishes it, and so a rental would have a model defining its details, perhaps called the rental model.

A model typically persists information to a web server, although models can be configured to save to anywhere else, such as the browser's Local Storage.

Components consist of two parts: a template written in Handlebars, and a source file written in JavaScript that defines the component's behavior. For example, our property rental application might have a component for displaying all the rentals called all-rentals, and another component for displaying an individual rental called rental-tile. The rental-tile component might define a behavior that lets the user hide and show the image property of the rental.

Let's see these core concepts in action by building a property rental application in the next lesson.

In Ember, we use the term hook for methods that are automatically called within the Ember application. These are methods that can be expected to be called automatically, rather than having to call them specifically.

Some examples of a hook are:

In the following example, the didRender() component lifecycle hook is used to log "I rendered!" to the console after each time the component is rendered.