In Ember, every route has an associated model. This model is set by implementing a route's model hook, by passing the model as an argument to {{link-to}}, or by calling a route's transitionTo() method.

See Specifying a Route's Model for more information on setting a route's model.

For simple applications, you can get by using jQuery to load JSON data from a server, then use those JSON objects as models.

However, using a model library that manages finding models, making changes, and saving them back to the server can dramatically simplify your code while improving the robustness and performance of your application.

Many Ember apps use Ember Data to handle this. Ember Data is a library that integrates tightly with Ember.js to make it easy to retrieve records from a server, cache them for performance, save updates back to the server, and create new records on the client.

Without any configuration, Ember Data can load and save records and their relationships served via a RESTful JSON API, provided it follows certain conventions.

If you need to integrate your Ember.js app with existing JSON APIs that do not follow strong conventions, Ember Data is designed to be easily configurable to work with whatever data your server returns.

Ember Data is also designed to work with streaming APIs like socket.io, Firebase, or WebSockets. You can open a socket to your server and push changes to records into the store whenever they occur.

Currently, projects generated by Ember CLI include Ember Data as a dependency in both package.json and bower.json. If you do not wish to use Ember Data, run the following command:

Learning to use Ember Data is easiest once you understand some of the concepts that underpin its design.

The store is the central repository of records in your application. You can think of the store as a cache of all of the records available in your app. Both your application's controllers and routes have access to this shared store; when they need to display or modify a record, they will first ask the store for it.

This instance of DS.Store is created for you automatically and is shared among all of the objects in your application.

You will use the store to retrieve records, as well to create new ones. For example, we might want to find a person with the ID of 1 from our route's model hook:

A model is a class that defines the properties and behavior of the data that you present to the user. Anything that the user expects to see if they leave your app and come back later (or if they refresh the page) should be represented by a model.

For example, if you were writing a web application for placing orders at a restaurant, you might have models like order, line-item, and menu-item.

Models don't have any data themselves; they just define the properties and behavior of specific instances, which are called records.

A record is uniquely identified by its model type and id.

For example, if you were writing a contact management app, you might have a person. An individual record in your app might have a type of person and an ID of 1 or steve-buscemi.

IDs are usually assigned by the server when you save them for the first time, but you can also generate IDs client-side.

An adapter is an object that knows about your particular server backend and is responsible for translating requests for and changes to records into the appropriate calls to your server.

For example, if your application asks for a person record with an ID of 1, how should Ember Data load it? Is it over HTTP or a WebSocket? If it's HTTP, is the URL /person/1 or /resources/people/1?

A serializer is responsible for turning a raw JSON payload returned from your server into a record object.

JSON APIs may represent attributes and relationships in many different ways. For example, some attribute names may be camelCased and others may be under_scored. Representing relationships is even more diverse: they may be encoded as an array of IDs, an array of embedded objects, or as foreign keys.

When the adapter gets a payload back for a particular record, it will give that payload to the serializer to normalize into the form that Ember Data is expecting.

While most people will use a serializer for normalizing JSON, because Ember Data treats these payloads as opaque objects, there's no reason they couldn't be binary data stored in a Blob or ArrayBuffer.

Because of this asynchronicity, the store immediately returns a promise from the find() method. Similarly, any requests that the store makes to the adapter also return promises. 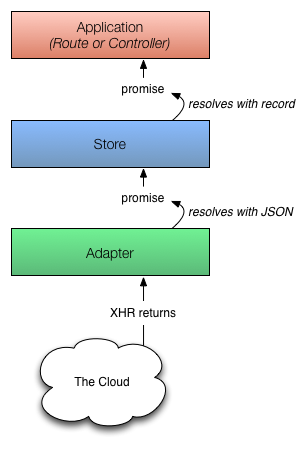 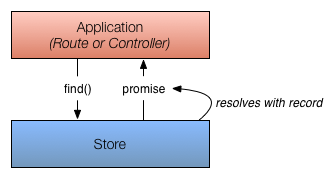 These are the core concepts you should understand to get the most out of Ember Data. The following sections go into more depth about each of these concepts, and how to use them together.