Welcome to the Ember Tutorial! This tutorial is meant to introduce basic Ember concepts while creating a professional looking application. If you get stuck at any point during the tutorial feel free to visit https://github.com/ember-learn/super-rentals for a working example of the completed app.

Ember CLI, Ember's command line interface, provides a standard project structure, a set of development tools, and an addon system. This allows Ember developers to focus on building apps rather than building the support structures that make them run. From your command line, a quick ember --help shows the commands Ember CLI provides. For more information on a specific command, type ember help <command-name>.

To create a new project using Ember CLI, use the new command. In preparation for the tutorial in the next section, you can make an app called super-rentals.

The new command generates a project structure with the following files and directories:

Let's take a look at the folders and files Ember CLI generates.

app: This is where folders and files for models, components, routes, templates and styles are stored. The majority of your coding on an Ember project happens in this folder.

config: The config directory contains the environment.js where you can configure settings for your app.

dist: When we build our app for deployment, the output files will be created here.

nodemodules / package.json: This directory and file are from npm. npm is the package manager for Node.js. Ember is built with Node and uses a variety of Node.js modules for operation. The package.json file maintains the list of current npm dependencies for the app. Any Ember CLI add-ons you install will also show up here. Packages listed in package.json are installed in the nodemodules directory.

public: This directory contains assets such as images and fonts.

vendor: This directory is where front-end dependencies (such as JavaScript or CSS) that are not managed by Bower go.

tests / testem.js: Automated tests for our app go in the tests folder, and Ember CLI's test runner testem is configured in testem.js.

ember-cli-build.js: This file describes how Ember CLI should build our app.

If you take a look at app/router.js, you'll notice some syntax that may be unfamiliar to you.

Ember CLI uses ECMAScript 2015 (ES2015 for short or previously known as ES6) modules to organize application code. For example, the line import Ember from 'ember'; gives us access to the actual Ember.js library as the variable Ember. And the import config from './config/environment'; line gives us access to our app's configuration data as the variable config. const is a way to declare a read-only variable, as to make sure it is not accidentally reassigned elsewhere. At the end of the file, export default Router; makes the Router variable defined in this file available to other parts of the app.

Once we have a new project in place, we can confirm everything is working by starting the Ember development server:

If we navigate to http://localhost:4200, we'll see the default welcome screen. Once we add our own app/templates/application.hbs file, the welcome screen will be replaced with our own content. 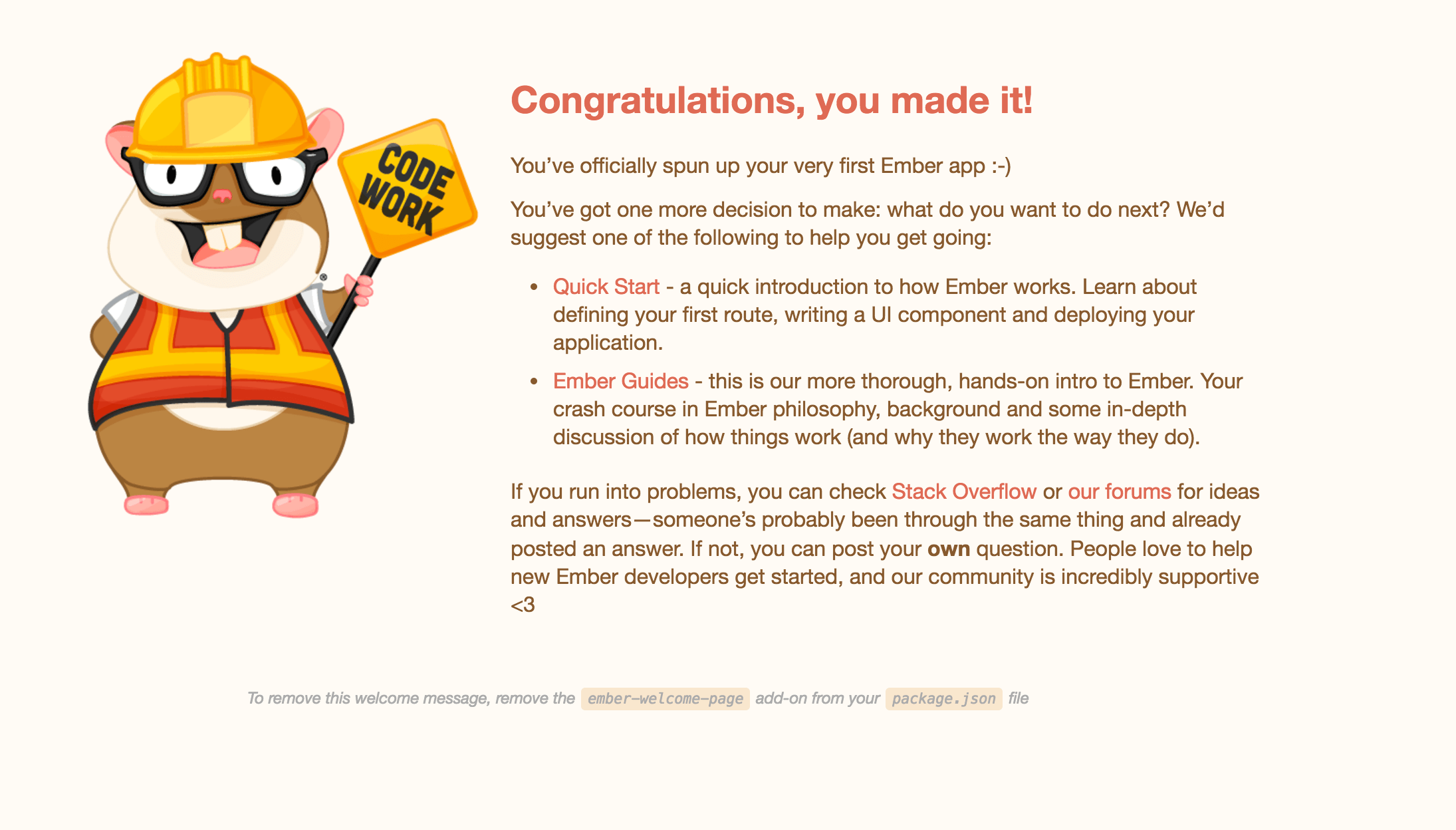